The development of DoSo Music has been influenced by many students, teachers, administrators and instrument designers.  Below is information on the most senior members of the team.

David Mills began his teaching career when (at age 20) he was asked to teach music to reform school boys in a summer program.  It was then that David realized music is first and foremost a form of communication, and even boys with no formal music training could pack a concert hall and bring down the house.  Although David has enjoyed success with “concert music” as well as “social music,” he decided to found DoSo Music to concentrate on the latter.  He began with DoSo Elementary and piloted progrms for underserved children in New Haven, New York and Nashville.  In 2015 he formally launched the DoSo String Band, a dance band designed to bring together people of all ages and socio-economic circumstances.  In 2017 David was one of twelve music teachers in the country to receive a Jubilation Foundation Fellowship.

Patrick W. Smith  With a career centered in New England for the past 37 years, but with a truly national and international outreach, percussionist Patrick Smith has performed as a soloist with various ensembles on five continents.  He is currently the director of “ONE4All,” the new educational initiative for Orchestra New England which seeks a seamless melding of classical music traditions with local and neighborhood cultures.  In acknowledgement of his work as a teacher at Cooperative Arts High School in New Haven, Pat received national recognition as a receipient of the special Community Award from the Grammys.  In addition, Pat is one of only two music educators ever to be awarded the Ellington Medal by the Yale School of Music for his work with today’s urban youth.

Patrick Smith is a virtuoso percussionist. Here he improvises in an unstructured DoSo Freestyle duet with David Mills.

Karen Pfrommer is the “social dance” expert on the DoSo Music team.  Karen is the instructor for the Yale Ballroom Dance Club, and she teaches ballroom dance as an accredited course at Quinnipiac University.  Karen is certified with High Honors by the American and English branches of the Imperial Society of Teachers of Dance (ISTD).  As a dancer Karen has won a Northeast Regional Dance Championship, and she is the owner of the Dance in Rhythm studio in Branford, CT. 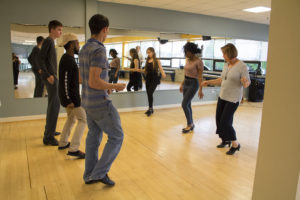